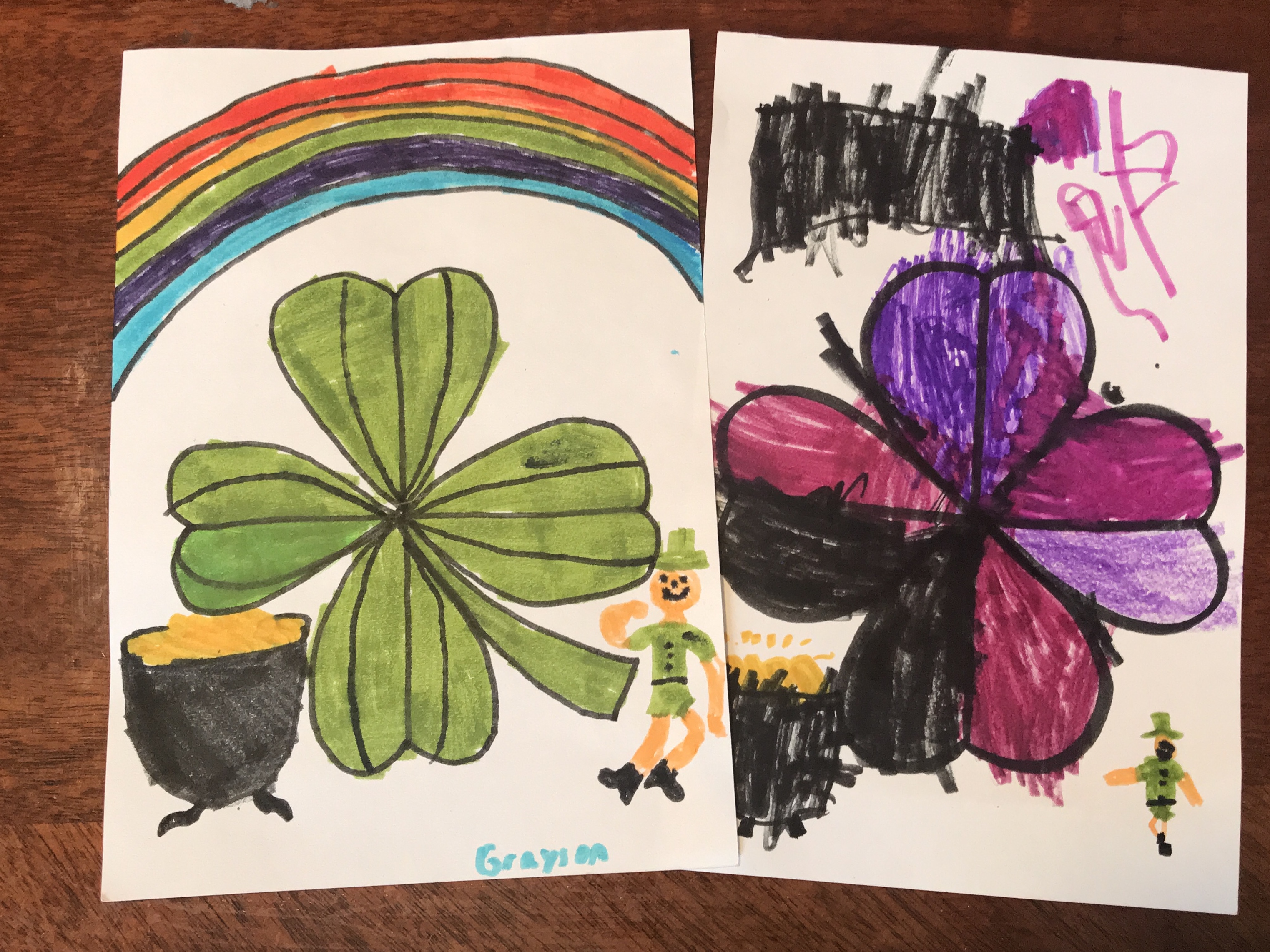 Top 'o the mornin' to you! Happy St. Patrick's Day from The Studio @ home! I hope you guys had fun on the first day of Digital Learning. Today, I wanted to do both a Daily Activity and St. Patrick's Day project. Both will brighten up this dreary day. Remember, hang your artwork up! It will bring joy to whomever passes by it, looks at it, or copies it. Today, we are going to go over a brief history of St. Patrick's Day. Why do some people celebrate St. Patrick's Day? Who is St. Patrick?

Well, to start off, St. Patrick wasn't really a 'saint'. He is only a 'saint' in name and was not actually given the title by the Catholic church. St. Patrick was never actually born in Ireland. He was born in Britain around 390 A.D., and then at the age of 16, Irish raiders destroyed his family home and kidnapped him, bringing him to Ireland as a slave. He was put to work in Ireland for many years. During the time he was in Ireland, he became deeply interested in Christianity , which eventually led him to convert many Irish pagans into Christians.

He claimed to hear voices from God. Therefore, once he escaped from Ireland in order to return to his family in Britain. However, he heard a voice from God telling him to go back to Ireland and preach the word of Christianity. Unfortunately for St. Patrick, Ireland was mostly pagan, a belief that respects and honors the land and nature. He was beaten and imprisoned on several occasions by Irish royalty and chief pagans.

By the time of St. Patrick's death, he was largely forgotten. However, myths and legends began to grow from the tongues of the Irish people about St. Patrick's deeds throughout his life, and thus he eventually became the patron saint of Ireland.

Throughout history, the holiday of St. Patrick's Day has continued to grow into a popular holiday. Traditions have sprung up, giving the holiday a worthy celebration every March 17th, the day historians presumed St. Patrick died. The tradition made a large jump over to America when the Irish potato famine from 1845-1852 caused over 1 million Irish to emigrate to the United States. Because the Irish-Americans were discriminated and poor, they began living off of inexpensive food like corned beef, cabbage, and potatoes, or turnips. The tradition stuck, and this became the dish of St. Patrick's Day.

While shamrocks are green, the color was associated with the green nature of Ireland, the grassy hills and the leafy trees. Known as The Emerald Island, Ireland is also home to myths and legends as leprechauns and faeries, usually associated today with the color green. However, some historians state that is was the Irish Rebellion that spurred the association with green. In 1789, the Irish began wearing green on the battlefield as a stark contrast to the British red. Before the rebellion, the official color of Ireland was blue. (https://www.nationalgeographic.com/)

Whether you are Irish-American, or not, now you have a lovely history of why come celebrate the holiday! Have fun today, wear green, find a leprechaun, color a shamrock, and be merry!

Remember, you need ART to be SMART!

Please click on the video, St. Patrick's Day, to watch our Shamrock Art Project! We had a blast of color!